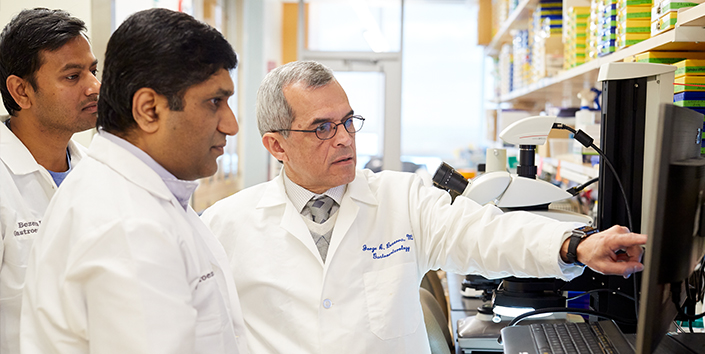 A groundbreaking test developed at Cincinnati Children’s can expedite a diagnosis of biliary atresia (BA), helping physicians decide quickly whether to perform a liver biopsy followed by an operative cholangiogram, the definitive test for BA. The test quantifies the concentration of MMP-7 (matrix metalloproteinase-7), a serum protein that researchers at Cincinnati Children’s discovered in 2017 is a biomarker of BA.

Physicians can order the MMP-7 assay by submitting a requisition form. Test results are available within 48 hours, and a pediatric hepatologist is always available for consultation regarding the interpretation of test results.

Benefits of the MMP-7 assay Early diagnosis of BA and prompt surgical intervention are the best predictors of treatment success, but current diagnostic methods are time-consuming, costly and imprecise. “Prior to the availability of this test, physicians who suspected biliary atresia would order a battery of blood tests, an ultrasound and perhaps a hepatobiliary iminodiacetic acid (HIDA) scan, a process that typically took several days or even weeks,” says Jorge Bezerra MD, director of the Division of Gastroenterology, Hepatology and Nutrition at Cincinnati Children’s. “The MMP-7 assay expedites decisions that bring the patient closer to treatment, ensuring that the child receives appropriate, timely care. It allows physicians to move quickly from an initial impression of BA to the MMP-7 assay, which allows for a timely decision to conduct confirmatory tests and then Kasai procedure.”

Research and development Introducing this assay for BA is the culmination of several years of research at Cincinnati Children’s. Researchers here published their discovery that MMP-7 is a biomarker of BA in November 2017. Last August, they published a follow-up study in a Rapid Communication (Hepatology 2018; 68: 2069-72). The study confirmed that the serum MMP-7 assay has high sensitivity and specificity to differentiate BA from other neonatal cholestasis, and may be a reliable biomarker for BA.

The predictive value for MMP-7 was high: 74 of 75 BA subjects were correctly identified as having BA. Only three non-BA patients were incorrectly assigned a BA diagnosis based on MMP-7 values.

Next steps Bezerra says that researchers at Cincinnati Children’s are exploring whether the diagnostic performance of MMP-7 may be superior to that of a liver biopsy in predicting BA. This finding could obviate the need for most liver biopsies in infants with cholestasis, meaning that those with high MMP-7 could proceed directly to intraoperative cholangiogram with possible Kasai. The team also is designing strategies to measure MMP-7 as a monitor of liver disease that is worsening toward cirrhosis.

Register today for our e-newsletter for physicians. Receive the latest information on clinical advancements, research updates and news from Cincinnati Children's.