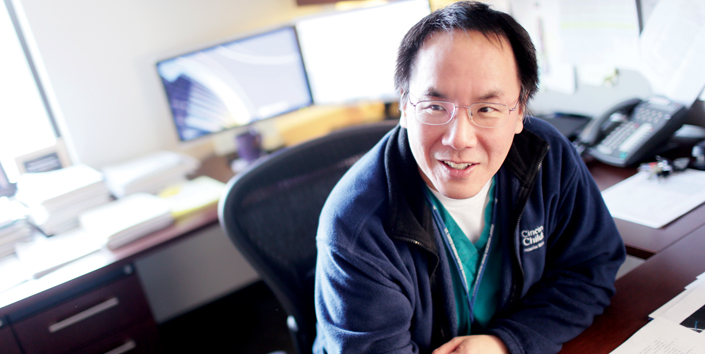 Pediatric surgeons at Cincinnati Children’s are using an innovative technique that employs indocyanine green (ICG) dye to intraoperatively identify hepatoblastoma lesions in the lungs that are microns in size. These surgeons are the first in North America to do so in pediatric patients, and early results are promising.

“We are able to remove nodules not detected by preoperative computed tomography scans,” says Greg Tiao, MD, director of the Division of General and Thoracic Surgery at Cincinnati Children’s. “This is a simple and effective adjunct to CT scans, and we believe patients can benefit from it.”

Surgeons in Japan pioneered the use of ICG dye in hepatoblastoma surgery, and their work inspired Tiao to adopt the technique at Cincinnati Children’s two years ago. The method is straightforward. At least 24 hours prior to surgery, the dye is injected through a central or intravenous line and is absorbed by liver tissues and hepatoblastoma lesions. Because the tracer is retained by tumors, the lesions become more readily detectable.

The surgeon uses an infrared light on the area of interest, and the dye emits a fluorescent signal that glows green, indicating hepatoblastoma. A high-definition laparoscopic camera shows the lesion(s) on a video monitor, and the surgeon resects the ICG-avid spots. With this technology, the tumor must be within one centimeter of the lung surface to be visible.

Pediatric surgeons at Cincinnati Children’s are using ICG dye in all lung surgeries for hepatoblastoma, regardless of how many lesions are found with CT. They still use magnetic resonance imaging to identify hepatoblastoma in the liver, which is the standard of care.

Twenty percent of patients with hepatoblastoma present with metastatic disease, and the lungs are the predominant site of metastases at diagnosis and relapse. Complete resection of metastatic hepatoblastoma is critically important for long-term survival.

“Using ICG dye as an adjunct to CT gives surgeons the best chance of finding every lesion possible, which can help prevent recurrence and ensure that chemotherapy is that much more effective,” says Alexander Bondoc, MD, a pediatric surgeon at Cincinnati Children’s. “We are hoping to establish a multisite, prospective clinical trial to evaluate this technique for hepatoblastoma resections of the lung, and perhaps for the resection of other solid malignancies, such as osteosarcoma.”

Pediatric oncologist James Geller, MD, says that using this technique affects clinical decision-making following surgery. “The practice of offering liver transplant to hepatoblastoma patients who had previous metastatic disease of the lung may be considered controversial, but we have done it,” says Geller, who is director of the Liver, Kidney and Retinoblastoma Programs at Cincinnati Children’s. “Our view is that when you feel confident that these organs have been cleared of cancer, you can start to think about taking such risks.”

“The next question is, how can we maximize the use of ICG dye in treating pediatric cancers?” Geller adds. “For example, there may be ways to use it as a targeting agent to enhance imaging techniques, or to deliver cancer-fighting drugs or other therapies directly to the diseased tissues.”

To learn more about the use of ICG dye in hepatoblastoma resection, contact Greg.Tiao@cchmc.org.

Register today for our e-newsletter for surgeons. Receive the latest information on clinical advancements, research updates and news from Cincinnati Children's.